What's on your mind?

UCP status is there, but probably needs FandomDesktop status.

Why do all the other wiki's have UCP except for this one, Nothing important i just want to know why...

Is there a way to filter by out new comments only in the social activity rather than both new comments and replies?

I am referring to api.php which is also usable via mw.Api. Is there a page for these changes already? If not, should we create one? I have already noticed a few significant differences and I think it might be helpful to users to have them conveniently documented rather then them having to figure it out by themselves. This especially so now that there won't be many (if any) legacy wikis to compare to in order to determine what might give analogous results.

Also, why are there so many duplicate categories in this Discussions and which ones are we supposed to post to?

I made a bookmarklet, is there a specific page it should go on, or can it have it's own page in the main namespace?

So I added UCP compatibility to MessageWallUserTags, but I can't seem to get the infobox to show it. I looked at other UCP compatible pages and didn't see anything that shows it is UCP compatible in the source. Does it have to be marked by staff? The UCP page also doesn't give that much information about marking scripts.

Any plans for custom namespace for the features like:

Also, why are there duplicate Discussions categories?

I wanted to know what's happening with the following scripts once everything is migrated to the Unified Community Platform. Since these are some of the scripts that I use that I do not know whether or not UCP format has been written for yet. So I wondered if anyone on the wiki knows what is happening with them.

Hey guys. I just wanted to thank the developers of this script. I used it to add templates we recently created to the bottom of 50s of pages over on the Zero Escape wikia and it worked amazingly. I really do appreciate this script, thank you for writing it!

(using the custom medals btw, not the extension)

Whenever i try to make a new medal from, it disappears once i finish editing the settings. Is this supposed to happen? 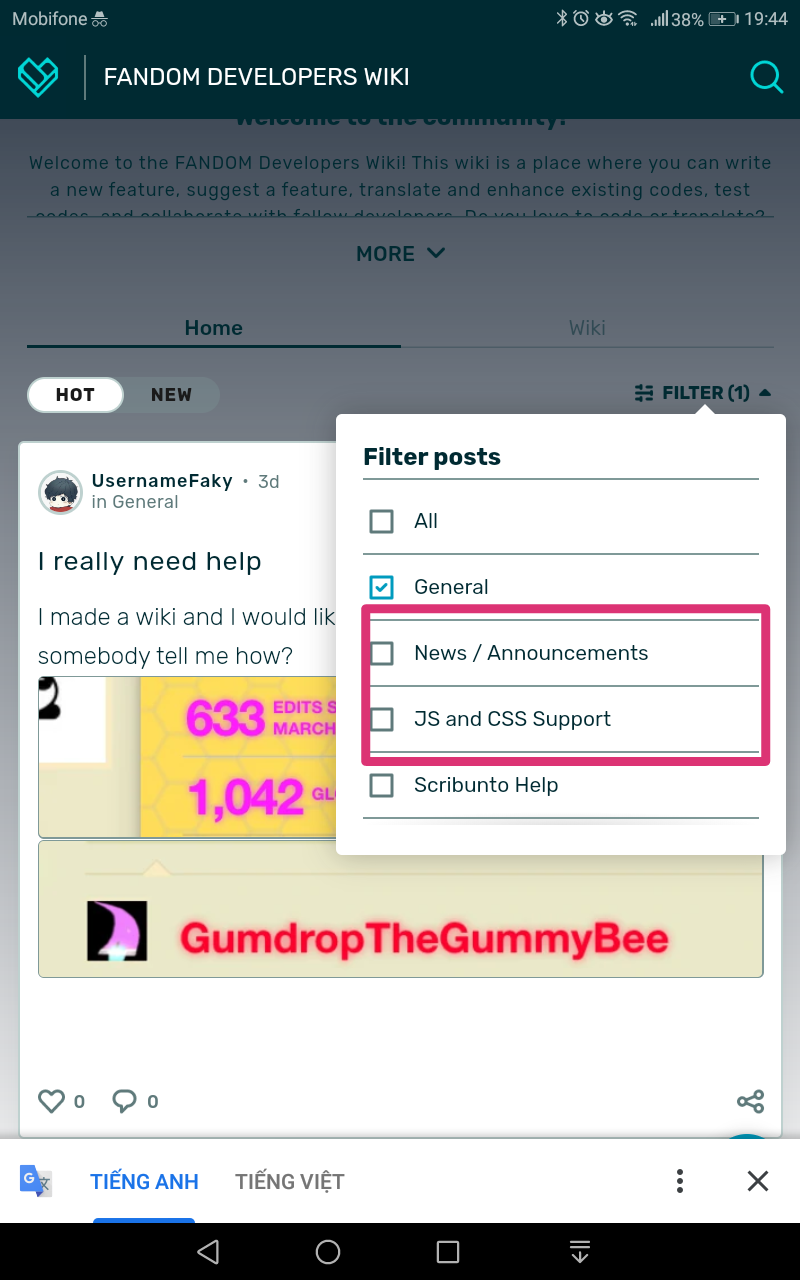 So I have been using this DPL code for the most part and it does what I want it to which is create a list of Leaders from my category Leaders of Team and the team those characters leads based on infobox data. But if you notice it has a lot of blank spaces. Since DPL can only output 500 items how can I tell DPL to exclude the missing data and only output the pages that have infobox data teams filled out?

Wrote these replies here but seems each time one was posted, a NewPP limit report was added yet I never wrote those. There is something that's adding that report (whatever it even is) to that area for some inexplicable reason.

Harmless but intriging, so making a note here in case it arises in the future, and if anyone would like to solve this peculiar mystery that would be good as well!

I notice that by default, it only gives one space to add 1 category at once when using MassCategorization. Is it possible for me to add 2 categories at once into pages? (Like adding a comma or pressing Enter and type the second category)

(edited by Littlefoot the Longneck)
MassCategorization

Apologies if this isn't the correct board. I read the descriptions and it wasn't entirely clear to me where this would go.

So, I have already come up with this CSS and was wondering if it would be a decent candidate to add to this wiki.

What does it do? It fixes what I believe to be some display issues with the syntaxhighlight/source tag under certain conditions. Specifically:

From what I can tell, there is no visually discernible change when these conditions aren't met; so it shouldn't cause any odd display behavior unless interacting with other CSS (such as Nord or GeSHiStyles).

I have provided an exaggerated example below:

If it would be a good idea to add it, how do I do that? Is it just as simple as creating the documentation and stylesheet as described here or is there more to it?

Apparently the line numbers aren't too much of an issue in threads. But if you test it on a normal page you can see what I am talking about. Also make sure to disable personal and site CSS/JS. Apparently Community Central already has some CSS that mitigates some of the display issue. Not sure if the same is true here.

Hi, is there a way I'm able to customize a user status for my user only? How do I do it?

I don't really understand why using #ifexists is considered more expensive than including a template--it seems like the latter would be more expensive. The first just checks if the file is there, the second actually loads in and parses the file, which it can only do if the file exists. Perhaps because #ifexists is adding non-existent pages to the Wanted Pages, etc.? Is there really not a cheaper version to do the same, or could it be done cheaper by a Lua module? I'm thinking of very common issues like adding links that may or may not have an icon, where the template would only display the icon if it existed, and would start displaying it if someone uploaded one with the same name as the link.

How expensive are "expensive" functions? I'm scared to use any of them, though I see we're allowed to use up to 100 per page (obviously including templates, etc.), and my understanding is if you have a template without parameters that uses one, it would rarely execute anyway as the template output would be cached.