This is the talk page for discussing improvements to the SeeMoreActivityButton page.

LatestActivity controller doesn't return diff information (anymore?), so it would require a few more API calls to get these links, I suppose. -- Cube-shaped garbage can 07:58, April 22, 2017 (UTC)

I'm not sure if it's an intended feature of MediaWiki, but it's possible to link to the latest diff for a particular page by adding an empty diff parameter to the URL (e.g. [1]), avoiding API call. - OneTwoThreeFall talk 08:21, April 22, 2017 (UTC)

I managed to resize it in Inkscape then appended the HTML. It doesn't work with QuickDiff but somebody could fix that, I guess. I don't think it's possible to use WDS icons in wikitext yet but somebody could make a script for that. Yeah, I know there's WDSIcons but I feel that's more a library than a script for using WDS icons in wikitext. -- Cube-shaped garbage can 19:56, April 22, 2017 (UTC)

I have this loaded in global.js as well as on a local Wiki (in ImportJS), & I have a duplicate button. Could that be fixed again?
UrsuulTalkCMDate6:53 PM Sunday, April 30, 2017 (UTC)

The JS was reviewed quite some time ago, but the duplicates still occur.
UrsuulTalkCMDate10:34 PM Tuesday, May 2, 2017 (UTC)

When imported through console, it worked for me. This part of your site JS is throwing an error:

Could you go to Test mode and clear your cache? Because pasting the code from your revision in console while other site JS is disabled works. -- Cube-shaped garbage can

When the button is nudged

I noticed that when the button is pushed down by a text, this makes it hard to click it. Making the clickable area limited to the top right part of the "See More" button. So, is it it possible to increase its clickable area in this case?--Luma.dash (talk) 19:16, June 30, 2017 (UTC)

Icons on the Left

Can you return the icons that were on the left? I'll show images on how they should be, because they would look inconsistent with the new design:

That would be much more complicated than the script currently is. The script currently only adds the "see more" button (because that's the script title) and adds diff links next to titles (because that was easy to do and was requested). Adding icons depending on actions taken would mean the script would have to run an HTTP request to the WikiActivity API endpoint, parse it (because it's returned as HTML, not as real data) and then refill the Wiki Activity module with that information. That sounds like it should be put into a script named "ActivityModuleEnhancements", not "SeeMoreActivityButton". You could try requesting such a script on the Script Suggestions board. -- Cube-shaped garbage can 17:22, August 8, 2017 (UTC)

Alright. Thanks for the info.

Button is broken on some wikis

Honestly I'm rather disappointed with the new design of the See More Activity Button. Is there any way to get the original style back, even as a personal script so that those who favour the old design can continue using it whilst still receiving updates to it to prevent the old design from becoming broken? ― C.Syde (talk | contribs) 03:56, July 17, 2018 (UTC) 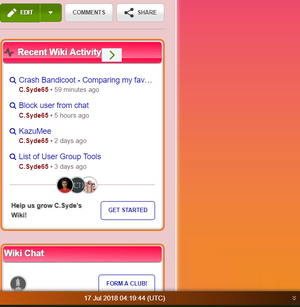 Not the script that looks awful there. I have a clean styling fix that I'll bake into the script by tonight.
If there's anyone doing that by CSS, please don't - you're showing non-English users inconsistent messages. • speedy • 🔔︎ • 🚀︎ • 14:56, July 17, 2018 (UTC)

There's a problem with it still. It still doesn't look identical to how it looked before the recent updates. If you look at how the button looks here you'll see what I mean. It doesn't match the other buttons on the module. ― C.Syde (talk | contribs) 09:48, July 18, 2018 (UTC)

Ugh. Honestly it would have been better if they'd kept the old version of this script for those wishing to stick with the old style or created an opt-in extension for those wishing to add the new style. It requires too much effort to figure out what's causing the button to do that. ― C.Syde (talk | contribs) 10:19, July 18, 2018 (UTC)

I've figured out what's causing the problem. It's the WikiaNavigationBarStyle CSS but there's no question about modifying the style-sheet so that it can't affect the "See More" button. At least not by myself. ― C.Syde (talk | contribs) 10:23, July 18, 2018 (UTC)

I fixed the button position, but the highlighted lines in your wiki CSS need to go:

Alright. But there's still problems being caused by the WikiaNavigationBarStyle style-sheet. It would be great if there was some way of styling the button so that the WikiaNavigationBarStyle can't conflict with it. Also it would be nice if there was a way that I could revert the new button style on wikis that I'm not an administrator on. I like to have that button on all the wikis that I'm active on. ― C.Syde (talk | contribs) 10:36, July 18, 2018 (UTC)

Is it possible to configure the old design using the regular method (writing window.SeeMoreActivityButtonOld = true; in the community JavaScript instead of creating a new MediaWiki page)?—|| Grudgeholderr ||— 05:39, July 20, 2018 (UTC)

Anyone else having issues with this not loading occassionally? For the past few months it has sometimes required a purge edit to ImportJS to actually get it to work again, it seems to randomly not load. Monk (Bureaucrat) Talk 14:56, November 1, 2018 (UTC)

Not showing up at all

Since yesterday, the code has glitched on me and it never shows up despite installing such into my JS! This code has to be fixed; until then, I recommend you not use it! -- Ready to rock! (talk) 16:52, January 4, 2019 (UTC)

It's working for me. Are you importing the script personally or sitewidely and, if sitewidely, on which wiki? -- Cube-shaped garbage can 16:55, January 4, 2019 (UTC)
I've been using it sidewide in my global.js since last summer. I discovered it just yesterday, and it's strangely disappeared! I asked FANDOM to fix the glitch, but they never answered, and now today, it's still glitching on me! I was so upset I had to remove it. --Ready to rock! (talk) 16:57, January 4, 2019 (UTC)

Nope, it didn't work. I rearranged my global.js so that SeeMoreActivityButton is below View Source, then bypassed, but still, it's not there! --Ready to rock! (talk) 17:04, January 4, 2019 (UTC)

Retrieved from "https://dev.fandom.com/wiki/Talk:SeeMoreActivityButton?oldid=114285"
Community content is available under CC-BY-SA unless otherwise noted.